How to Streamline Government Proposal Writing

At Redstone GCI, we are constantly seeking new tools to make our clients lives easier (and by extension, ours, too) when it comes to maintaining compliance and completing deliverables for government customers.  One of the most challenging areas for contractors of all shapes and sizes is the proposal management process. The government’s increasing use of multiple award IDIQ and other task order driven contracts often necessitates the formation of contractor teams. In these situations, not only are you worried about your prime proposal, but you’re also managing data calls to your subcontractors to create the consolidated volumes for response to the government customer. To say managing this process can be a challenge is an understatement.

Recently, we’ve had several clients utilizing a relatively new to the market solution called OneTeam.  Not only have we found the solution to be useful in clearing the inbox and keeping the wider team apprised of deliverables, due dates, data calls and other routine communications, but we also love that it was developed by a Redstone GCI client.  Redstone GCI has worked with Glenn Meyer, President and CEO of The Trident Group for over a decade, and during that time, he has assisted with all manner of routine issues that contractors encounter when working with the federal government, but one area that has perpetually been a sticking point for Glenn was the management of the proposal process.  I remember in the early days Glenn asking, “why does this have to be so hard?” I’m glad he’s got the answer now that IT DOESN’T!

Glenn and his team are experts in the areas of data and document management solutions having solved multiple challenges related to the management of one of the largest weapons systems contracts for a major prime contractor over the past decade or so. He got his start working for the government on the Trident submarine program many years ago, and he and his team have continually evolved to support an ever-wider range of complex projects. Their early adoption of Microsoft Azure and cloud-based tools for SharePoint solutions and document management lead to the genesis of OneTeam about 4-years ago. In that time, the platform has seen a quiet rollout to a few select contractors, many of which we’ve had the opportunity to work with and seen the impacts first hand.

Glenn’s team employs the principles of another awesome client of Redstone GCI, Lean Startup, as well as Agile Software Development.  The linking of these methodologies means the platform is continually built and improved upon directly from user feedback with new tools and features often being added in a matter of weeks.

So why do I like OneTeam, besides the great back story?  Well for one, as I said, it makes our lives much easier in managing client proposal data calls, document editing and ensuring the “one-voice” through the proposal process when there may be 20+ individual voices speaking, writing, and responding to the various proposal volumes. Secondly, I’ve come to rely on OneTeam in my day-to-day life at work supporting clients all over the world.  A very common request is "I’m looking for a 'unicorn' for a teaming partner. Do you know of anyone?" Previously, I’d rely on FPDS data queries which were debatable at best to identify potential partners based on constraints like size, designation, geographic location, NAICS, et al.  The OneTeam Search feature made me so happy the first time I used it.  The search pulls FPDS data alongside many other data sources, making filtering down a list based on everything from congressional district, NAICS code, set-aside type, customers, and so many others an absolute breeze. Third, I’m hoping to collaborate with Glenn and his team in the coming year to develop some additional features focused around our primary area of client proposal support, the dreaded cost volume.

Beyond these main benefits that I’ve experience first-hand, there are a ton of other great features for government contractors probably best seen via a demo. I would highly recommend anyone struggling in the proposal process to check it out.

OneTeam can support the entire business development lifecycle - from opportunity identification, to capture management, and proposal development. OneTeam is perfect for any contractor who is new to or already knows how to bid on Government contracts. Create better proposals with OneTeam! 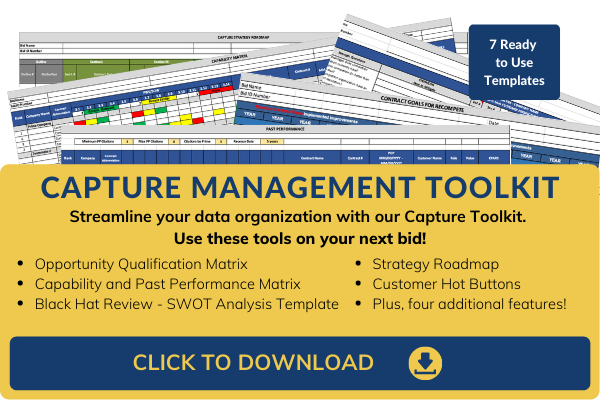 Building a successful technical approach is critical to winning a contract. After you have developed a custom workflow...

How to Energize a Custom Workflow Graphic with Subject Matter Experts

Technical approaches in a government proposal can become complex as you demonstrate how your team can fulfill the...

Join us at the Proposal Managers Networking Breakfast on Thursday, October 7